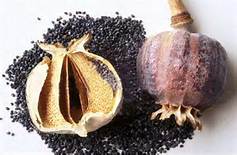 Poppy, Papaver somniferum L., is an annual herb native to Southeastern Europe and western Asia. Also known as opium poppy, the species is cultivated extensively in many countries, including Iran, Turkey, Holland, Poland, Romania, Czechoslovakia, Yugoslavia, India, Canada, and many Asian and Central and South American countries. Reaching a height of 1.2 meters, the erect plant can have white, pink, red, or purple flowers. Seeds range in color from white to a slate shade that is called blue in commercial classifications. 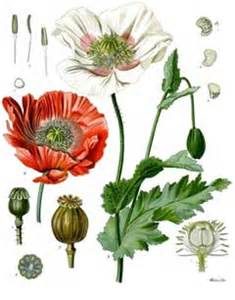 A latex containing several important alkaloids is obtained from immature seed capsules one to three weeks after flowering. Incisions are made in the walls of the green seed pods, and the milky exudation is collected and dried. Opium and the isoquinoline alkaloids morphine, codeine, noscapine, papaverine, and thebaine are isolated from the dried material. The poppy seeds and fixed oil that can be expressed from the seed are not narcotic, because they develop after the capsule has lost the opium-yielding potential (11.1-128). Total yield of alkaloids is dependent on light, temperature, the plant species, and the time of harvest (5.2-4). 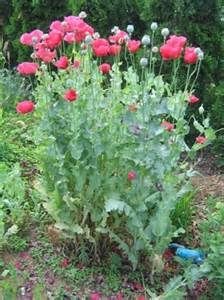 Poppy seeds are used as a condiment with baked goods and pastries for their nutty odor and flavor. Poppy oil is widely used as an edible cooking oil. The oil is also used in the manufacture of paints, varnishes, and soaps (14.1-35). Opium is used in the production of morphine, codeine, other alkaloids, and deodorized forms of opium (14.1-35). Morphine is the raw material from which heroin is obtained. Poppy plants are important as ornamental plants in flower gardens.

Poppy is one of the most important medicinal plants. Traditionally, the dry opium was considered an astringent, antispasmodic, aphrodisiac, diaphoretic, expectorant, hypnotic, narcotic, and sedative. Poppy has been used against toothaches and coughs. The ability of opium from poppy to serve as an analgesic is well known. Opium and derivatives of opium are used in the pharmaceutical industry as narcotic analgesics, hypnotics, and sedatives. These compounds are also used as antidiarrheals, antispasmodics, and antitussives (14.1-35). Opium and the drugs derived from opium are addictive and can have toxicological effects.

The poppy has had a tremendous impact on several societies as an opiate. Currently, there is interest in developing a poppy plant rich in thebaine and low in morphine as the former could be converted to codeine and other legal pharmaceutical products with less morphine available for illegal conversion into heroin. 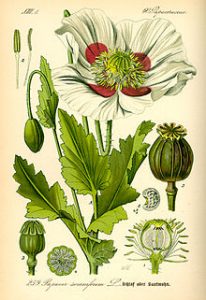 Papaver rhoeus L., known as corn or field poppy, is an annual herb native to Europe and Asia. Extracts of the plant are used in medicine and beverages. The alkaloids rhoeadine, morphine, and papaverine have been reported in this species (14.1-32). Papaver orientale L., formerly Papaver bracteatum Lindl., is a morphine-free alkaloid source used for medicinal purposes. Mexican or prickly poppy, Argemone mexicana L., has been reported to have toxicological properties but no substantial medicinal uses have been recorded (11.1-136).

Poppy seed is generally recognized as safe for human consumption as a spice or a natural flavoring (21 CFR section 182.10 [1982]).