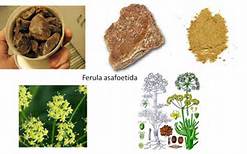 The herbal plant called the asafoetida is native to Afghanistan, Iran, and Pakistan in Asia – this herb is a perennial plant. Fully grown, this herb can often reach six feet or up to two meters in height, it possesses a fleshy taproot at its base. This herb when in bloom produces composite leaves and inflorescence of the types called umbels filled with a head of white flowers. The main use of the asafoetida is from the collection of its gum, the herb produces a gum exuded through the roots in all full grown plants which are at least four years old. This herbal gum is normally collected during the summer months, the gum of plants that are less than four years old are seen as worthless and are not commercially used in any product. As a general rule, the most productive plants as far as gum production is concerned, are older plants. During the process of harvesting for the gum, the normal method is to first cut away the sterns, and then to make successive slices through the roots to get at the gum accumulated there. In addition, the exuded gum from the plant is first allowed to well up and only then it is collected following its hardening within the roots. 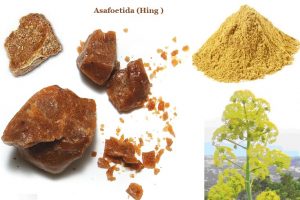 Ancient Romans preferred the asafoetida as a flavoring agent above all other herbs, despite the unlikely nickname of devil’s dung given to the herb. As a source of pungent flavor, the asofoetida is still used widely today, the pungency of the herbal aroma is far more persistent than that of the commonly used garlic, and the ever popular Worcestershire sauce contains the asafoetida as one of its main ingredients.

The herbal remedies made from the asafoetida come in the form of a powder and in the form of a tincture. As far as herbal remedies made from the herb are concerned, the pale yellow or the orange yellow colored essential oil, which is sometimes used to replace garlic in aromatherapy, cannot be a substitute for either the herbal powder or the tincture of asafoetida. 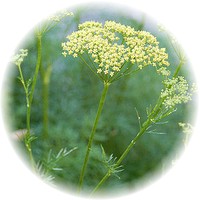 For specific health conditions, the effective and beneficial effects of asafoetida based herbal medications are as below:

Treatment of colic: the herbal remedies made from the asafoetida can help in the treatment of this condition, the herb does this by its ability to locally stimulate the mucous membranes in the body, and this stimulant action of the herb is particularly effective in the mucous membranes lining the alimentary tract. The great beneficial effect of these actions is that it results in the easing of symptoms of colic and also results in effective reduction in the flatulence affecting the patient, the herbal remedy is very useful as a laxative medicine due to this property. Treatment of high cholesterol: the herbal oil of the asafoetida plant can be used as a substitute oil to reduce elevated cholesterol in patients, when this herbal oil is consumed by the patient at relatively high doses on a regular basis, it was observed to very significantly lower the total cholesterol levels in the body which are normally associated with very high fat consumption in people. As a side note, the amount of asafoetida found in the Worcestershire sauce as a dose does not compensate for the total cholesterol derived from consuming the steak.

Treatment of insect bites: another positive effect of the pungent smell of the asafoetida aside from flavor is that it can actively repel insects from the skin and body if applied as a topical cream or ointment. Treatment of the irritable bowel syndrome: the herbal oil of the asafoetida can also help to bring relief from accumulation of intestinal gases and thus it effectively reduces the irritation felt by patients afflicted by the condition known as irritable bowel syndrome. The herbal oil of the asafoetida is furthermore useful for its calming effect on muscle affected by spasms and in the treatment of digestive disturbances brought on by the presence of undue anxiety and related emotional disorders. Treatment of nervous disorders: as an individual stand alone herbal remedy, the asafoetida remained one of herbal remedies which was most commonly prescribed by herbalist to treat hysteria during the entire stretch of the nineteenth century, during this time, the herbal remedies made from the asafoetida were also extensively used in the treatment of many other physical and emotional symptoms connected to sudden mood swings and to long and short term depression in different people.

Side effects and cautions

Caution is advised when using the herb, as eating raw asafoetida herb has been known to induce symptoms such as nausea and vomiting in different patients. Additionally, the continuous and regular utilization of the herbal remedies made from the asafoetida over very long periods of time can induce irritation in the throat, it can lead to the accumulation of gas in the abdominal region, it can cause diarrhea, and it may also lead to the development of a distinct burning sensation during urination in patients. Pregnant women must avoid the use of this herb in any form during the term of pregnancy as possible side effects can disturb the pregnancy. The herb has been known to induce miscarriage, and it is also known to affect the periodicity of the menstrual cycle.