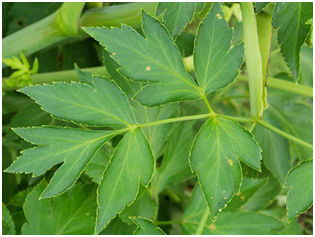 The oldest written record of the values of Ashitaba appears more than 2000 years ago. Of the many thousands of plants that are known, Ashitaba belongs to the elite 1% category considered to be medicinal plants. Ashitaba was discovered in Japan in the Longevity Islands. This Asian herb is a type of Angelica and belongs to the Umbelliferae family. It is also known as Chinese Angelica, or Dong Quai. The use of the Ashitaba plant dates back to the Ming Dynasty (circa 1518-1593). It is easy to identify the Ashitaba plant by its yellow sap.

Ashitaba has its origins on the Island of Hachijo (volcano Island which belongs to Seven Islands of Izu) where the warm tropical currents pass by on their way North to meet the cold Arctic waters of the Pacific. It has been consumed as a vegetable and medicine for many hundreds of years by the local island herbalists. Ashitaba has another name called “Tomorrow leaf” refers to an interesting botanical fact. If its leaves are picked in the morning, new leaves will be in place by the next morning. This is due to its ability to reproduce its green stem and leaf almost on a daily basis. “Tomorrow’s Leaf” is very popular in Asia for its medicinal properties. Entire plant of Ashitaba is used. 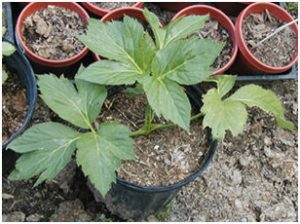 Asitaba’s scientific name called Angelica keiskei Koidzumi, derived from the Latin word “Angel,” because of its mystical, highly praised effects. The population of Hachijo Island is known for their longevity, living until the ripe old age of 90’s. When all aspects of their life style were analyzed the determination was that the consumption of Ashitaba was a heavy contribution to the extended lifetime. As more study was conducted on the composition of this special strain of angelica, Ashitaba has been attracting more and more attention from the scientific community.

Ashitaba contains a variety of vitamins, minerals, proteins and plant fiber. This powerful strain of Angelica was unknown until recently. Only a few islanders knew of this herb and kept it a guarded secret. Anyhow, recent studies in Japan and US show that Ashitaba rich in highly potent antioxidant – chalcone. Donald Buhler and his colleagues at Oregon State University discovered that the minute amount of chalcone present in hops was six times as potent as those antioxidants found in citrus fruits, almost four times as potent as those in soy and two times more potent than those of green tea.

1) Take 3g of dried Ashitaba leaves and put in a cup.
2) Pour 200 ml freshly boiled water into the cup.
3) Cover the cup and allow the Ashitaba leaves to steep for about 5 minutes.
4) Remove the leaves and drink the juice like tea consumption.
The juice (Tea) may be blended with honey or sugar to balance off the bitter taste of Ashitaba.

Ashitaba is a native Japanese apiaceous plant that has been eaten as a healthy vegetable and used as a medicinal herb for a long time in Hachijojima, Japan. It is believed that Ashitaba can contribute to their longevity and good health. In fact, Ashitaba has a higher nutritional value than the other vegetables, such as spinach or tomatoes. The Japanese eat the leaves raw or cooked, make Ashitaba tea by pressing the leaves, sprinkle finely ground Ashitaba powder over a variety of foods like yogurt, and include the powder as a healthy, functional ingredient in products like baked goods and noodles.

However, Chinese herbalists extract healing substances from the Ashitaba plant by boiling it or soaking it in wine. When the Ashitaba’s root is removed, it can be taken as an oral medicine. Nowadays, it is also available in tablet, capsule, teabag and raw root forms as well as an ingredient in cosmetics.

1. Ashitaba is a natural herb. It is safe to be consumed without side effect.
2. Individuals with health conditions and are under medications are advised to consult their physician before consuming Ashitaba.
3. Pregnant and nursing women should not use this supplement.

There is no side effect found in the previous research.